Tortured in China: Two Canadians Who Lived to Tell the Tale 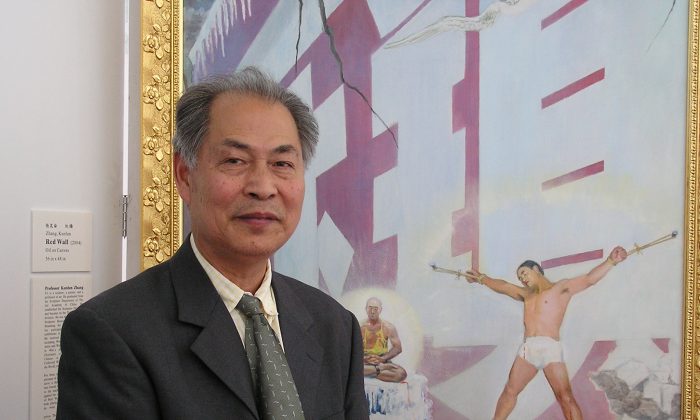 Artist and sculptor Kunlun Zhang is pictured standing in front of his Painting “Red Wall.” Zhang said the painting is a realistic portrait of some of the torture methods used on Falun Gong practitioners incarcerated in China's forced labour camps. (The Epoch Times)

Editor’s note: The Epoch Times is publishing a number of articles exposing the use of torture by the Chinese regime against the groups it targets, and the suffering and harm it causes to those subjected to it.

A simple trip back to China from Montreal to look after his elderly mother-in-law turned into a nightmare for Kunlun Zhang.

A Canadian citizen and an accomplished sculptor and art professor, Zhang was detained several times and subjected to mental and physical torture for practising Falun Dafa.

Falun Dafa, also known as Falun Gong, is a meditation discipline that in the 1990s was praised by Chinese authorities for its health benefits. Back then the practice had 70 million to 100 million adherents, according to government estimates. Due to its immense popularity, however, it was targeted for persecution in 1999 by then-Chinese leader Jiang Zemin.

During his detentions, Zhang was brutalized with an electric baton to the point that he had trouble walking. He was also forced to sit straight on a low stool for long periods and watch propaganda films demonizing Falun Dafa.

“The aim was to force us to give up our faith,” said Zhang. “Anyone who protested or tried to meditate faced a savage beating.”

He said a police officer told him: “We can do anything to you without being held responsible. If you die, we will bury you and tell everyone you committed suicide because you were afraid of a criminal charge.”

“Then they shocked me with electric batons all over my body and two policemen shocked me at the same time. … My skin was burned, my left leg injured to the point that I couldn’t move it, and my clothes were torn in several places. I could smell my flesh burning. The pain was excruciating,” he said.

During his detentions, he wasn’t allowed any visits from family members, nor to make or receive phone calls.

In November 2000, Zhang was sentenced—without a trial—to three years in a labour camp. First, he was at the Liuchangshan Forced Labour Camp, but had not denounced Falun Gong despite being tortured, so he was transferred to the Wangcun Forced Labour Camp, notorious in China for the brutal treatment of prisoners. (It has since closed.)

The brainwashing sessions were intensified, and he was monitored 24 hours a day by a group of policemen who relentlessly tried to turn him against Falun Dafa.

“After this went on day and night for a long time, I almost collapsed,” he said. “The psychological attacks were even worse than the physical torture.”

Thanks to efforts by his daughter and others back in Canada, including then-Liberal MP Irwin Cotler and Amnesty International, Zhang was released after three months and returned to his adopted country where he could practice Falun Dafa freely.

“The continuous forced brainwashing, lies, and mental torment caused severe damage to my mind that never completely healed, and I will have to carry these wounds for the rest of my life,” he said.

When Lizhi He was transferred from a detention centre in Beijing to a prison a few hundred kilometres away in February 2001, he was already in rough shape.

An award-winning engineer, He was sentenced to three and a half years for practising Falun Dafa. He served seven months of that in the detention centre, and for the entire time he was kept in a dark cell. Every day he was forced to sit still on a low, hard board for long hours, and even the slightest movement would incur vicious beatings.

“My underwear often got stuck to the festered skin on my buttocks resulting from being forced to sit on the board for so long,” he said.

But the fever that began six weeks earlier after guards doused his naked body with freezing water in the middle of winter was his biggest challenge.

“My face became deformed due to large pus blisters that covered my nose and around my mouth and eyes,” he recalled. “The extreme sharp pains in my chest and ribs made me hardly able to breathe or lie down for any sleep at night. I was struggling for breath and life, but each breath could trigger unbearable pains and convulsions.”

“For a few weeks I went through a life­-or-­death struggle.” 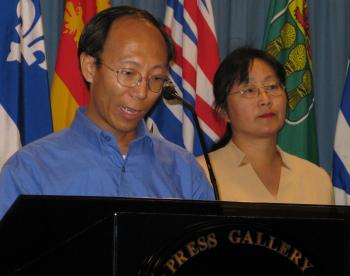 File photo of Former Falun Gong prisoner of conscience He Lizhi speaking at a press conference on Parliament Hill in Ottawa. To the right is Lucy Zhou, spokesperson for the Falun Dafa Association of Canada. (Donna He/The Epoch Times)

At Qianjin Prison, a young policeman was assigned to He. “My job is to get you transformed—to make you give up Falun Dafa by whatever means necessary,” the policeman told him.

“He was far from boasting,” said He. “I soon became part of their 24/7 campaign to subject Falun Gong practitioners to severe torture until they renounced their faith.”

In what He describes as “running torture,” he was forced to run outside in freezing temperatures to the point of collapse, then stand motionless until his sweat froze, then run and stand again, over and over.

At night he was put in isolation, deprived of sleep, and not allowed to use the toilet, while several prison guards took turns to torture him psychologically.

“These were the dedicated sessions to work on my mind and destroy my spirit,” said He, adding that a guard once yelled, “Falun Dafa practitioners are NOT human beings!”

“The torture continued day and night, week after week, and soon caused me to cough up blood every day. I couldn’t move a single step with my swollen legs and feet. Severe kidney problems nearly killed me. My breathing capacity was reduced so much that I couldn’t even sneeze or yawn,” he said.

In the summer of 2001, guards conducted a surprise search and found “Zhuan Falun,” the book of Falun Gong’s main teachings, among He’s belongings.

He was immediately taken to a room, handcuffed with his arms behind his back, and forced to sit on the floor in a corner. Two guards then stepped on his legs to prevent him from moving and proceeded to attack him with electric batons.

“My skin felt like it was being torn into pieces, with cracking sounds of shocks like continuous explosions,” he said, adding that, as further punishment, he was deprived of sleep and food for several days.

Despite the brutality, He not only survived but remained strong in his faith and was able to come to Canada in 2004. His wife had already moved here while he was still in prison.

Safe in Toronto, he said he still finds the torture “a nightmare to recall” and also feels immense sadness for the untold numbers of Falun Dafa prisoners of conscience who have died.

“Every time I think of fellow practitioners who were forced to disappear forever, my eyes are full of tears. It’s heartbreaking.”